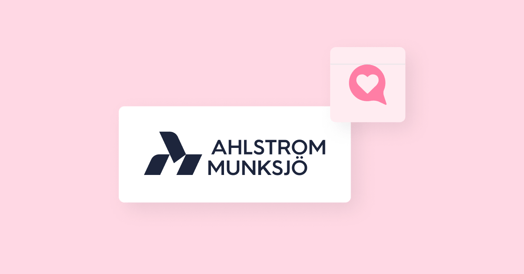 This blog shares the continual improvement success of Ahlstrom-Munksjö. Ahlstrom was founded in 1851 in Finland; Munksjö in 1862 in Sweden. They merged in 2017 to become Ahlstrom-Munksjö and became a privately held company called Ahlstrom-Munksjö Holding in 2021. The company has 45 plants in 14 countries, 7,800 employees, and global annual sales of €2.7 billion; it became a HappySignals customer in 2018.

Unlike many customer case studies, this story does not begin with the procurement of a tool. HappySignals was already part of the Ahlstrom-Munksjö product portfolio through its strategic partner Tech Mahindra, but it wasn’t efficiently used within the enterprise.

In 2019, they started a program called Project Happy because they saw a watermelon effect: the IT’s SLAs were all green, and everything looked fine, but somehow end-users were unhappy.

Tuna Ozcer, CIO Office, Global IT Manager: User Care and IT Process Management, stated that “From that point onwards, we started baselining our HappySignals data, and we worked hard to improve user experience throughout our IT services.”

The creation of Project Happy

The business case for Project Happy was for an internal project and was driven by IT leaders saying, “We need to find out what’s wrong here. Why do our metrics look good, but the organization’s end-users aren’t happy?” It brought outside-in thinking – thinking from the end-user’s point of view rather than just IT’s – to bear on the issue.

Ahlstrom-Munksjö started with Net Promoter® Score 1 and used this as a way to get at the experience.

There wasn’t skepticism about this approach, but people wondered whether this would make a real difference because end-users had been giving their feedback to IT since at least 2008, and little had changed.

How IT approached the changes

The project team interviewed users in parallel with using the measurement tools, namely NPS and HappySignals. “We had to meet and talk with them because we needed to understand the numbers we were seeing from the Net Promoter Score,” Tuna said.

With 45 plants across the globe and travel restrictions due to COVID-19, it wasn’t possible to visit all the different locations. Instead, the Project Happy team conducted meetings via Microsoft Teams. “It brought us closer to our users. It was important because numbers are one thing, but communicating with us plant by plant—it changes things when you talk to people because digital feedback often doesn’t tell you everything.”

Dr. Ozan Acar, Head of CIO Office, explained, “We arranged sessions that we called IT Clinics with each plant. And in those, the intention was to listen to them and ensure that we understand their pain.”

This approach helped IT to see the pain reflected in the NPS. When the end-users in the various plants could see that the HappySignals solution works, because IT could correlate between the feedback from the IT clinics and the NPS, they began to buy into using experience data to drive continual improvement.

“Aha! These guys are finally able to see our pain points. Wow, that is good,” Ozan recalled the end-users saying. “Of course, it would be much better if we could visit them and do it like a roadshow, but it wasn’t possible. But still, it helped.”

The Happiness Officer was introduced

IT also introduced the Happiness Officer concept starting in certain plants. They chose locations with the highest level of unhappiness compared to the Ahlstrom-Munksjö corporate benchmark. The Happiness Officer’s task was to follow up.

“With 45 plants, it wasn’t possible to follow up with each in detail. But we were able to identify the ones to focus on. The Happiness Officers tell me what we can do, the inputs, and how we can improve the NPS. So that is another concept other than IT Clinics—the Happiness Officer concept,” Ozan recalled.

What the experience feedback began to show

Tuna told us, “There’s a common pattern we’ve seen everywhere. End-users are very happy with their local IT person. When they raised pain points in the plants, they also said, ‘We’re really happy about our local IT.’ It also shows you cannot replace face-to-face interaction. But, of course, you cannot always provide adequate resourcing on-site.”

The IT teams also began to see that certain technical services had consistently low scores, specifically file server and file shares services. This insight was very good input for the technical teams – the feedback that, “Guys, there’s something wrong here because, in each plant in each location, the score is low for this technical service.” They could see in detail that some specific technical services were not perceived well by the end-users. “Happiness is judged by perceptions in the end,” said Tuna.

Given this information, the technical teams could focus their work on the specific areas that needed improvement. This would not only begin to eliminate some of the pain points, but also start to earn the trust and confidence of the end-users, who could now see that their feedback was being listened to and acted upon, and it was having a positive effect.

The importance of experience design

“The experience you’re designing also creates satisfaction,” Tuna explained. “For example, a ticket follow-up being done by the resolver teams, the way we communicate about tickets to the end-user, or the questions that we’re repeatedly asking them when we’re assigning the ticket from group A to group B.”

“And we’ve seen some important insights,” he went on to say, “like what frustrates end-users most of the time is the experience that we design.” These insights became advice for their IT service desk: “If there are issue changes, please read the ticket before approaching the end-user if you don’t understand something. This change was really important because typically we are engineers working in the IT area. We tend to neglect the importance of experience design.”

“Being able to see the experience with HappySignals gives a lot of insight about the value of processes and if they’re performing well. This is not a technical thing. It’s about how you serve the food to the table in a restaurant.”

The metrics and KPIs Ahlstrom-Munksjö used

The employed metrics, measures, and key performance indicators (KPIs) are critical in any initiative. They show the effects of the work, indicate success (or lack of it), and justify continuing or increasing the investment of resources in the program.

Tuna said, “The main indicator is the Net Promoter Score. For scores that are 0 or 1, meaning ‘I really felt like this service doesn’t work at all,’ we focused on those items. Are they coming from specific assignment groups, for example?”

In tactical meetings with their service delivery vendors, IT emphasized and worked on areas that really needed improvement. A key goal was to uplift the Net Promoter Score to the corporate benchmark level. “Out of half a million feedbacks from HappySignals, we saw, in many locations, 60+ Net Promoter Scores. Values like 15+, 10+, and 20-25 are shared with teams; there is an opportunity to perform better.”

Gathering and sharing data and information

The Project Happy team made everything visible to these lower-scored teams and the service delivery managers. So everyone saw the same problem. “I think this is the main importance of the platform. Everyone can understand the same thing when looking into their particular area. It changed the equation drastically from the ROI point of view: We could see specific areas to improve.”

As Ahlstrom-Munksjö dug into the experience-based information, the teams began to see more detail:

“With HappySignals, you get specific feedback, and you can just kindly ask the relevant agent, ‘Can you apply these templates we have in the service desk tool for talking with end-users?’” said Tuna.

The Project Happy team directly shared all the data with the locally and regionally responsible people. “What we’ve done is basically transparency; after that, they understood and tied their work to customer satisfaction. Technically, we didn’t change anything. It’s like a continual improvement project.”

Specific insights and the associated improvements

One of the team’s key insights was the difference between what the end-users expect and what the company has in its agreements with contracted service providers. “We decided to add an estimated delivery time to the ticket communications. We started stating, ‘Okay, the approximate time to deliver this service to you is seven days’ or similar. We saw that we could set the right expectation with the end-user because there had previously been a mismatch. They shouldn’t expect that we get things done in a day or an hour if the SLA says within a week.”

Also, the team noticed that many people were saying that the service desk repeats the same questions. As a result, they changed the procedure used by the Level 1, Level 2, and Level 3 support people to ensure that the support analysts checked the ticket notes and don’t ask the same things.

Hearing the end-users and seeing results

The key message the Ahlstrom-Munksjö Project Happy team gave end-users was, “We hear you. We listen to you, and we know what you sent as feedback.”

Ozan stated, “We try to do our best, acting humbly, and let them know that we’re working on it. When they start to see that improvement, they’ll rate you higher in every respect because they see the improvement happening. Let the end-users and everyone see what you’re seeing. Nothing is hidden; everything should be open and available.”

The Ahlstrom-Munksjö Project Happy team found that it requires courage to uplift the end-user experience. Patience is essential because 90% of the time, you’ll hear unpleasant stories in the IT clinics (for example); recognition and thanks are 10% of the time. “Just listen to them because if you object to things, that is the worst thing you could ever do,” Tuna said.

“Take notes, synthesize, understand the problem, then close the loop. If people feel like you know, but nothing is changing, they’ll not bother to share their feedback next time. That is also another psychological process. The way you communicate with the end-user base is also critical. But you need patient people in the IT support team who are keen to listen and change,” said Ozan.

Continual improvement is exactly that

As a business partner, Ahlstrom-Munksjö IT continues to improve its relationship management. They have learned that nothing can replace that relationship aspect: no tools, no self-service, no nothing. Instead, you need to invest in relationship management; there’s no escape from that. In the three-plus years of measuring experiences, they’ve seen in their journey that they should keep investing in relationship management with their end-users. “The HappySignals solution helped us to see what is missing. But you cannot handle this if you don’t invest. It’s about supporting each other.” said Ozan.

If you'd like to learn more about using experience data to drive continual improvement, please check out the on-demand recording from industry authority Roy Atkinson: Creating the Business Case for EX-driven Improvement. 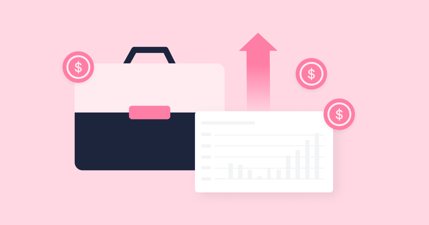 When an organization aims to instill a culture of continual improvement, it’ll usually adopt formal improvement ... 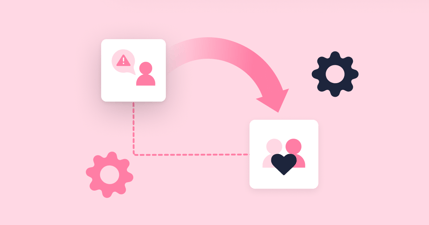 In my previous blog, I challenged eight flawed assumptions or misinformed beliefs that people might have related to ...