Experience is about People, Process, and Technology - in that order

Many organisations focus on implementing tech and then building processes, without first understanding the problems end-users are actually facing. But that’s the wrong way round in ITSM and Service Delivery.

Focus on People, Process, and Technology – in that order. 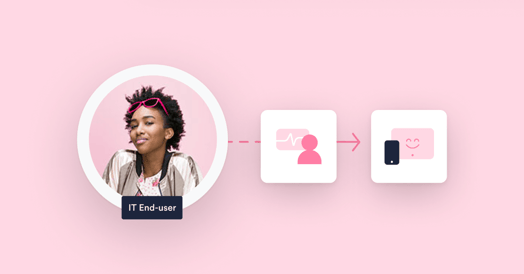 July 16, 2021
Having worked for many years myself building IT services for large organizations, I know all too well how easy it is for IT to focus first on Technology or Processes, instead of People.
Many organisations focus on implementing tech, and then building processes so that their employees can work efficiently. In IT we are tech-oriented after all, so opportunities to upgrade tech naturally grab our attention.
But this is in fact the wrong way round, especially in ITSM and Service Delivery.
If you start from tech-based improvements without first understanding the problems people are actually facing in your organization, then your efforts will neither make end-users happier nor productive.
That is why we believe that creating a great IT end-user experience is about focusing on People, Process, and Technology – in that order.

The broken telephone problem in IT

You may remember playing that childhood game where you pass a message from one person to the next. The message the last person receives is completely, sometimes hilariously, different from the original one.
This broken telephone effect perfectly captures what often happens in IT development.

When end-users face a ‘Problem A’ with IT, that message may be relayed from their Manager to Director, sometimes even the CIO, before it gets passed on to IT Directors and IT Teams. By the time it gets to the people who are actually responsible for improving IT, the message has completely changed.
The result? An unrelated ‘Idea C’ from IT, such as a new tech upgrade, that solves a different ‘Problem B’, but makes the original ‘Problem A’ even worse. This leads to a wasted effort (and money) and more unhappy end-users!
This doesn’t just happen in the development of IT Services, but also in Enterprise Applications where the new apps IT develops may not in fact support end-users in their daily work as much as they might think.
So how do we avoid the broken telephone problem?

Start from People, to know where to go with your Processes and Tech

Delivering great services needs to start from listening to the end-users themselves. What areas are they shouting about which need improvement?
For example, end-users in UK may be saying that most of their lost time comes from CRM issues from home offices. From this feedback, you can already rule out most other processes and immediately focus on figuring out what exactly about the combination of the CRM and VPN is not working. Or, you may even think about completely replacing the VPN with, for example, two-factor authentication that relies on cloud CRM.
Whatever the eventual solution may be, substantive end-user feedback will guide you towards the Processes and Technology that need work. So focus on People and understand what they really want, then tailor the Processes and Tech around your end-users’ needs.

Here is where HappySignals can help

Using the HappySignals Experience Management Platform for IT demo environment (with demo data), let’s see how real-time Experience Data from end-users across all IT touchpoints enables you to drill down on specific issues that need fixing. 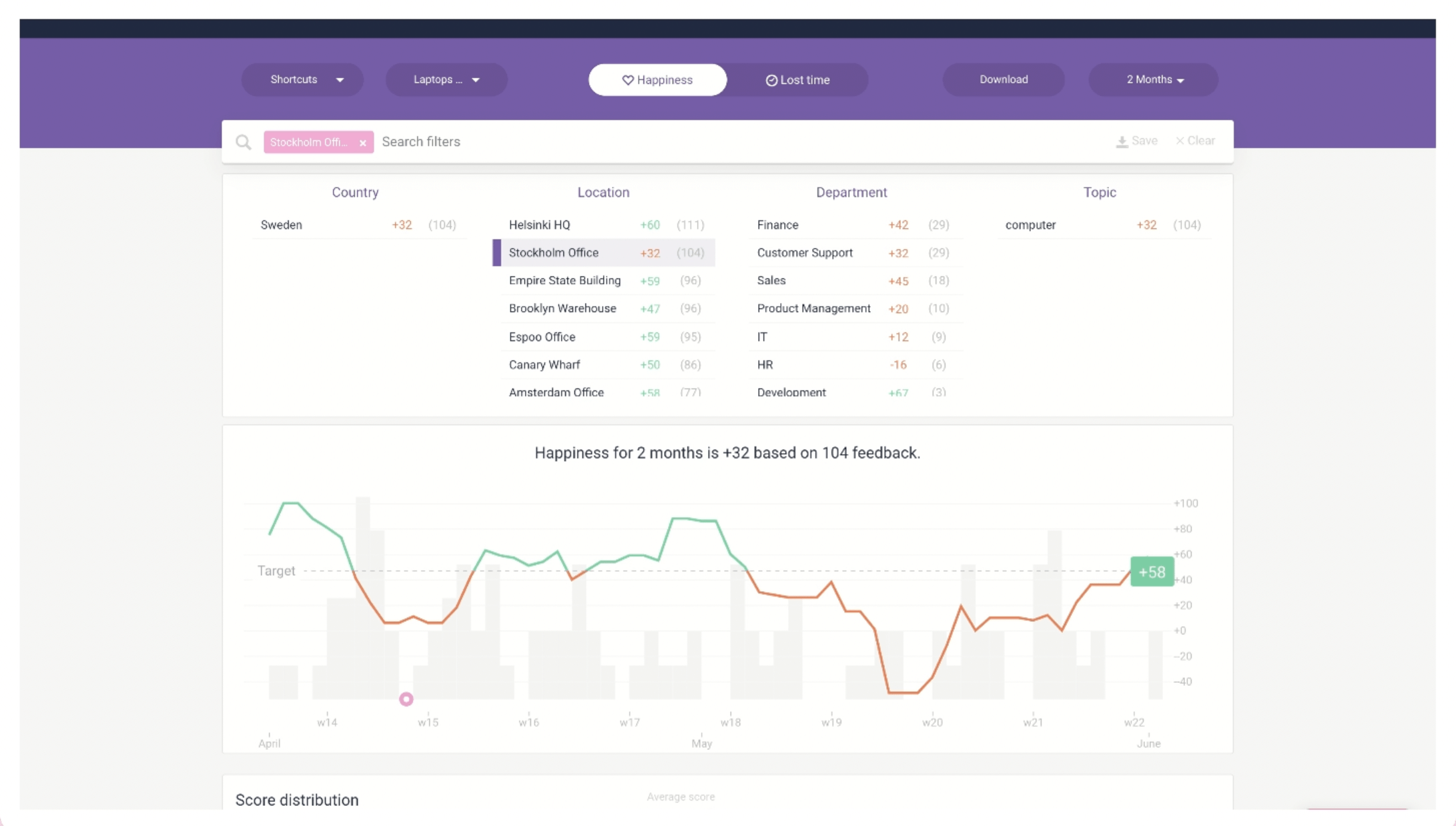 Filtering for feedback on “Laptops and Computers”, we notice immediately that end-users in the Stockholm Office are particularly unhappy about their devices. The relatively high volume of 104 feedback responses about this touchpoint in one office also emphasizes the need to look into the underlying reasons for end-user unhappiness here.
But just knowing that end-users are unhappy is useless if you don’t know why.
HappySignals hence allows you to also drill down on specific reasons why end-users rated their Laptops and Computers the way they did, whether positively or negatively. 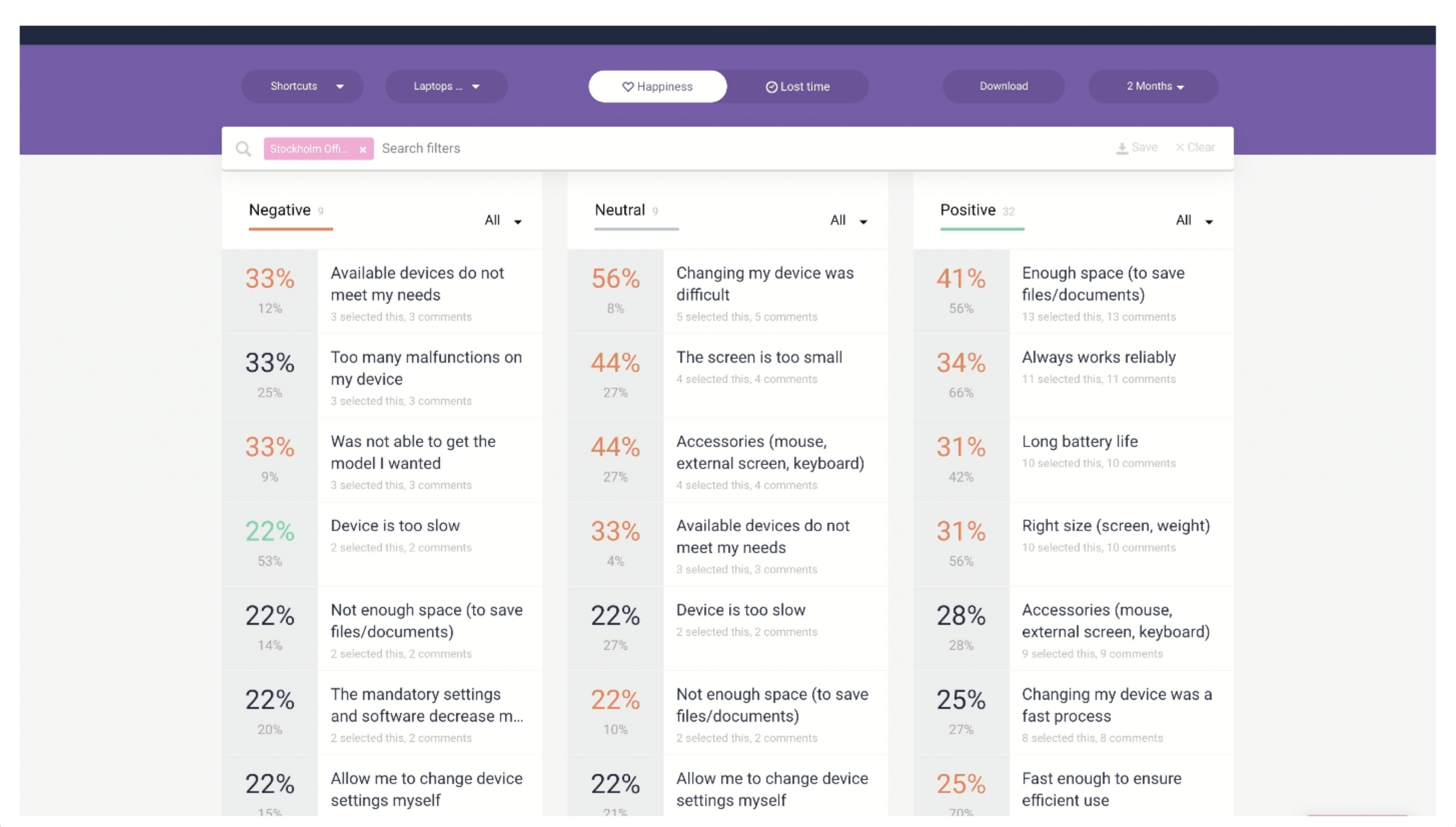 In this demo data for example, 33% of end-users who rated their devices negatively said it is because the available devices do not meet their work needs.
You can even read more comments from end-users explaining the problems they face. Getting such granular, real-time end-user feedback gives you insight into real issues that end-users are facing, that would probably be overlooked by traditional IT metrics. 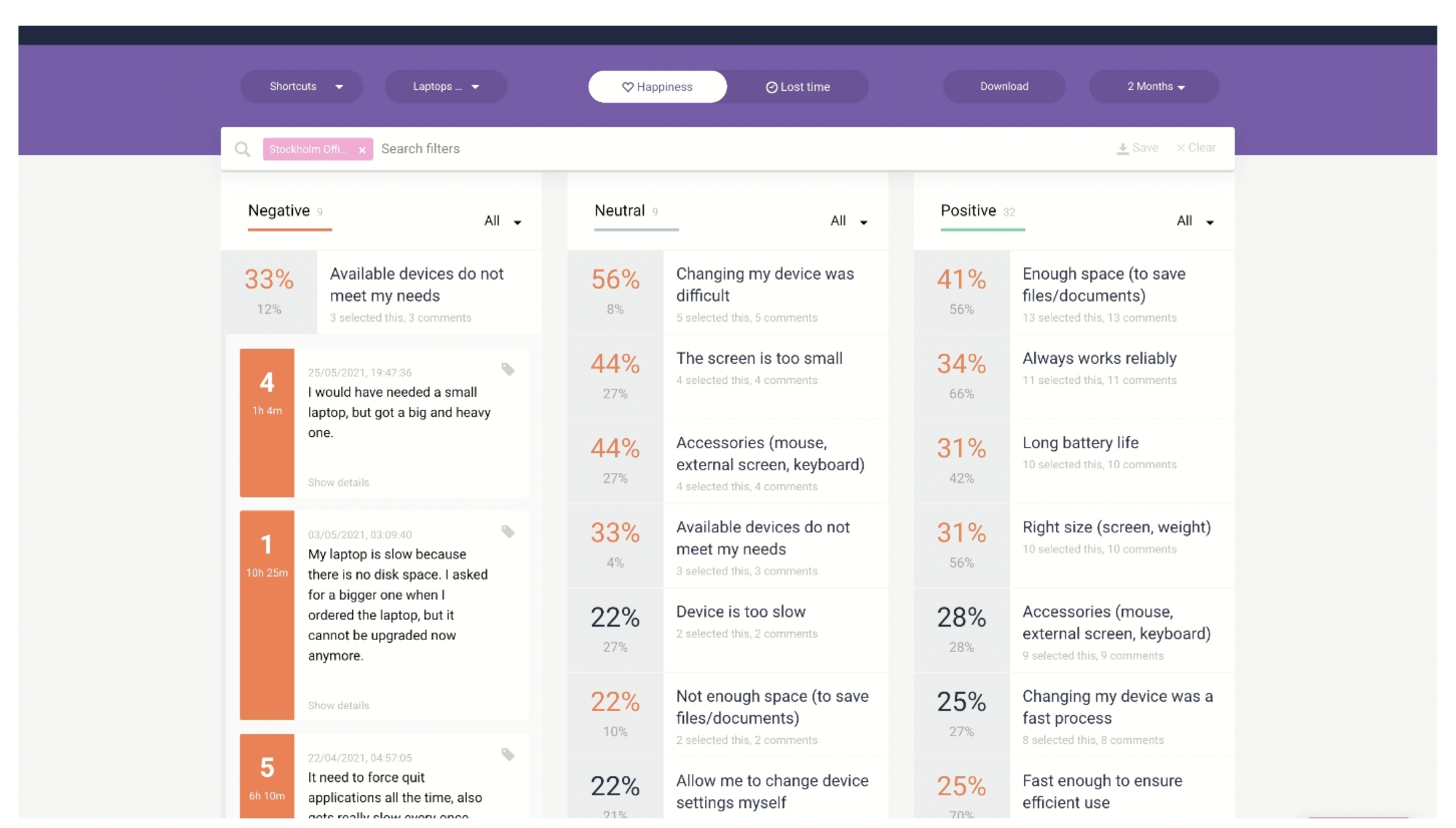 Want to see how the HappySignals platform works more interactively?
I do a short demo in the latest episode of Happy in 15, while chatting with my co-founder Sami about why a People-first rather than Tech-first approach is the way to go if you wish to deliver great experiences for your IT end-users.
Or check out our full 11-min product demo to see all the features of the HappySignals Experience Management Platform for IT, and its use cases for IT and Service Management.

If you enjoyed watching this, be sure to subscribe to Happy in 15 and never miss an episode. If you prefer to read than watch, stay tuned for more blog posts like this one!
Looking for something even more bite-sized? Check out our recently released Learning Center, where we cover everything from XLAs to optimizing your ServiceNow.
#IT Strategy, #Experience Management, #Human-centric IT

What has increased productivity got to do with employee happiness?

HappySignals provides an independent benchmark for the Service Management employee experience, that we call the ...

In HappySignals measurement tool, we define employee into four different behavioural profiles. In this episode we ...