How to use employee experience measurement as motivation for Service Desk teams and agents. How seeing the positive will increase their job satisfaction and showing the negative will allow agents to learn from their work.

How to use employee experience measurement as motivation for Service Desk teams and agents. How seeing the positive will increase their job satisfaction and showing the negative will allow agents to learn from their work.

Pasi Nikkanen: Welcome to Happy Today Podcast. This is a podcast for those who want to improve service experience of internal services. If you use ServiceNow or other enterprise service management system, then this is for you.

Pasi Nikkanen: All right. Welcome to episode 2 of Happy Today Podcast. Today we are going to talk about the motivation of service agents. I think a good approach on how we can get started with the topic is since Virgin Trains is one of our customers, and everybody knows Richard Branson, Mr. Branson is always saying take care of your employees and they will take care of the customers.

Pasi Nikkanen: Something else that we found, this is of course like a thought from a thought leader, but what we also found from Jeff Wrehenberg in 2018 was that they measured in metric net what is actually the effect of agent work motivation and job satisfaction to the customer satisfaction. I think they found if you make them 20% more satisfied, the agents, you will get a 15% increase in the customer satisfaction. It is a really important topic, I think.

Sami Kallio: Personally, I think for me making the motivation with agents a bit better is a really big thing because I really think that that is ... I would hate to be working at the service desk.

Sami Kallio: You are taking phone calls and emails from wherever about whatever IT issue, and you're supposed to be able to solve them, and the customer is angry. In addition to this, if you are really measured by how many tickets you solve per hour, if you really think about that you are then measuring that agent on how fast they are getting rid of their customers. That would be kind a of terrible thing. I'm measured by how fast I am, not what is the value of my work and that's ... I would be so pissed off every day, sorry.

Pasi Nikkanen: No, I know what you mean. The funny thing is also, in IT many times we only show that the agents in the weekly meetings the negative things. The escalations, this big manager had an issue with this meaningless service, in an enterprise context, and now we have to use all of our force and our energy to think about the escalation. What was done? Who should get punished? And that kind of thing.

Pasi Nikkanen: When in reality, what we have seen from the data that we gathered is that 75% of all the feedback you get from employees is positive. If you get all that positive feedback back to the agents, they will be more motivated. I just got a really good feedback from the work I did, so now when the next case comes, I already have this good experience in my head. I'm more motivated, more happy, I have a better tone of voice when I answer the phone, and so on. I think it's really important.

Pasi Nikkanen: To get out of that. I think another thing is the learning aspect. You can learn from the good and the bad. I usually use the metaphor of camera times because I used to do some photographic stuff as a hobby, so think about the time when you have film cameras. You do something, you take a picture, after a week or two you get the picture back and then you try to figure out, "What did I actually do? Why did it fail? Why did it come out as a really good photo?" When in a digital time, you take a photo and you instantly see, "Oh, no. I have to take a new one."

Pasi Nikkanen: I think this is the thing that we want to try also for the agents, that they can learn instantly from the feedback that they get. They're get it instantly, then they can do something differently the next time or if they see, "Hey, this is working, then let's do more of this thing."

Sami Kallio: Yeah. There was discussion about a year ago with one agent who said that he kind of now feels that he is posting to Facebook when he's resulting tickets and I'm like, "Please explain, I don't get you now." He said that sometimes when he thinks that he did it very well he has the same feeling as posting to Facebook that, "Now people like it or how many likes will I get?" How happy that agent was and that's the right kind of attitude that they should be having. Thinking about how to make the agent feel and that's making them more motivated. That's excellent to be seeing that.

Pasi Nikkanen: Yeah, and I think you get some meaningful to your daily work. I mean, now I come to work to actually help my colleagues. I'm actually trying to save my colleagues time not doing as fast at ticket closing as possible, but actually make sure that they got the resolution that they were looking for, they're able to continue their work, and then get them to be happy.

Sami Kallio: Or maybe even sometimes ask, "Is there something else I could help you with?"

Sami Kallio: Which, this sadly not so often asked.

Sami Kallio: Back to the learning curve, I think one thing would be, we have been able to do and what we want to be able to do is that ... in our measurement, we area also measuring how skillful agents are and what is to ad agents kind of two different things.

Sami Kallio: It is easy to learn from those, but what we have seen that's a really good thing to do, some customers have done this that they are now having a list of those agents who had the best ... most of mentions that they had a good attitude. Most of the mentions where they were having the good, great, skills in service desk. Only having those top lists is a good thing. I wouldn't really want to have, and there has been one case in our customer base, that had this hour score as an agent ranking.

Sami Kallio: That's not a ranking, that's definitely not the ranking because there're some superheros who will handle tickets after 7 others have tried.

Sami Kallio: Of course, there will be a bad score. That's not their fault. It [inaudible] what happened before. You have to only appreciate the good things and the skill. Also, I would like to say that between the 4 years, we have seen that the demand of skillful agents is getting bigger and bigger.

Sami Kallio: Yes, an agent world we are talking about the soft skills, but also the hard skills because the end users are getting more skillful and skillful. We know from our placement that the most technical people are the most unsatisfied for the super. That's quite easy to understand because when they call, they don't get the right level of technical skills from the first layer of first desk and then they are not happy. The motivation agents, their skills, training them that is really a key to everything to get people happy.

Pasi Nikkanen: Yeah and I think also celebrating the good feedbacks. One thing that we did with a customer was to actually have, next to the coffee machine, have a screen where they only show the positive feedbacks. You're at the machine, you're concentrating on solving the things so when you take a break you go and get coffee or you have some water, get the lunch at work cafeteria, then why not show all the positive things they are coming true. Many times we also see that the employees are mentioning in the free text those agents by name, so seeing your name so that everybody in the team can see your name, they're doing a good job. I think that's really key.

Pasi Nikkanen: What would you say, again, if somebody feels listening to this that, "Yes, I want to try to motivate the agents more." How should they get doing this? What are the steps?

Sami Kallio: I was really starred, really showing the direct feedback to the agents immediately when they got it and try to get that loop as fast as possible. From the resolution to the [inaudible] end users or the agents, the feedback. Don't be afraid of it. Some people have been really but we can't because they're only going to hear bad things. If there is bad things in your service desk, don't try to hide them.

Sami Kallio: Use the agents also to recognise the trends because they can do that. They can help you guys, if you get 5 bad feedbacks in one week and you know that it was not my fault, I will call to my manager and tell him, "Please, we have to get this resolved because I cannot help these end users."

Sami Kallio: That will help you to recognise the things. I really want and support you guys to do it in a way that's ... be transparent and also for agents and all people in IT to really get things changed.

Pasi Nikkanen: All right, thank you. That was episode 2 of the Happy Today Podcast and if you want to learn more, you can always go to happysignals.com and talk to you soon. 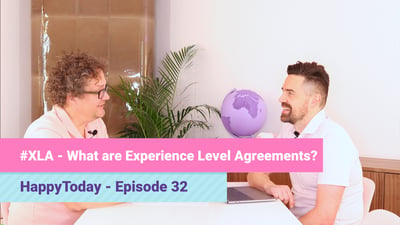 #XLA - What are Experience Level Agreements?

Experience Level Agreements are an ever growing topic in ITSM. However, the term has never been given a single ... 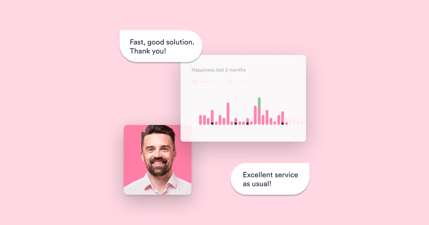 Service A gents working on the Service Desk often receive lots of negative feedback and are demotivated as a result.   ...