Happiness Score™ is an ITSM Benchmark we gather from our customers' data. It's anonymised and updated daily and the numbers used are from the past 6 months.

Happiness Score™ is an ITSM Benchmark we gather from our customers' data. It's anonymised and updated daily and the numbers used are from the past 6 months. In this episode we go through the numbers as they stand in April 2019, with some insight into what they tell us. As the first episode we do some introduction to the topic and in the future we'll bring more insight into the details. Enjoy.

Pasi Nikkanen: Welcome to HappyToday podcast. This is a podcast for those who want to improve service experience of internal experiences. If you use ServiceNow, or other enterprise service management system, then this is for you.

Welcome to episode four of the HappyToday podcast. Today we're going to talk about Happiness Score™. What is Happiness Score™? So, Happiness Score™ is something we gather from all the customers, from all the IT incidents, and requests in HR and so on. We have around 1.5 million responses in our database. And from this we actually publish a public number on our website, so we can go to happysignals.com/happinessscore.

Pasi Nikkanen: Today, Sami will tell us a little bit of what we've found from the numbers in April 2019, so we understand where the world is going, what has been changing. But yeah, let's start. So first, Sami, the overall number, and now today we are talking about the IT incidents. We have around 300,000 responses from last six months where these numbers are gathered, so what have you seen in the overall numbers?

Sami Kallio: All right, so today exactly the Happiness Score™ is 64, and about half a year ago it was 62. So, that seems to be about the level. Two points up might sound not much, but in fact when we were measuring also the lost productivity, so the perception of how many hours and minutes were lost per ticket, that has been changing a bit more. About six months ago that was three and a half hours, now it's less than three hours per incident. So, still a lot, but I would say this is looking good, at least from our customer's perspectives. They are getting happier employees and getting the lost work time down.

Pasi Nikkanen: All right. The next topic in our Happiness Score™ is profiles. And the profiles is something that it's a thing that we do, it's an IT behavioural profile. So, how do you behave when you have an IT support situation? Tell us a little bit on those, what we can learn from the profiles?

Sami Kallio: Right, so these profiles are done in a way that we know that some of these profiles people are a bit more technical than others. And the other question that we have in our surveys is what do you do when you have a problem with IT? Do you try to solve it on your own, or do you contact the service desk for help?

Sami Kallio: So, with these two questions, technically, and do you solve it on your own, we divide people to these four different groups. The biggest profile that we have in our benchmark is doer, and it has been getting bigger and bigger all the time. And this doer profile is a person who is technical, and has tried to solve the problem on their own. And also that is the biggest and most challenging profile from service desk perspective, because as I already said, they are technical, they have tried to solve it. So, when they contact service desk, it's a complicated issue.

Sami Kallio: Also I think the crowd of people in this profile is because there are more and more so called millennials or even younger people entering the work environment. So, their demand and their skills are higher in IT than the ones that are leaving the workforce.

Pasi Nikkanen: Yeah, probably, it also might reflect that people are just using much more IT in their consumer world, so when they are just on their outside work they're using mobile devices and all these kind of things. So they're going to also feel that they are actually getting more confident with the IT devices.

Sami Kallio: Yeah, yeah. I think later on we will have a total episode about these profiles, but if you want to know, get more information, go to our webpage and there is a download, free ebook about these profiles. I love them, it's just an easier way to think about and making sure that all agents and everybody in IT understand that you cannot really have one profile for everyone to make them happy. Let's go to the next area.

Pasi Nikkanen: All right. So, the next topic we have are the channels. The channels are reflecting how employees got their IT ticket. So, is it through email? Phone? Self service portal? Do they go to an onsite support? Or are they using something like chat? What have you learnt from those numbers?

Sami Kallio: I think this has been changing during the years quite much, and still would maybe start this by [inaudible] now there is 32% of all feedback is still gathered through email. Sorry, the tickets are sent through email.

Sami Kallio: And then 29% phone, 19% portal. And now, remember, this is IT incidents. Requests is a bit of a different thing, but we don't have time for that today. Then walking, only 1%, and chat, 3% at this stage. I think maybe the surprising part here is that when we start to talk with new customers, or prospects, or whatever event about end user experience, many people first think the portal. And then that is the way to get people satisfied. But in reality, portal is the most hated channel from end user's side. Maybe that word is not right, because the expectation level for portal is also really, really high, because end users are comparing portals in the working environment to the ones they are using in their consumer life. So, their expectation level is big, and you have to really have the portal in.

Sami Kallio: Done with end users using their language is not IT language, and so on.

Pasi Nikkanen: What about the emerging channel called chat? At least I know when talking with customers that many are now considering taking it into use. So, what do you see from that? From how satisfied and how productive it makes the employees.

Sami Kallio: I think the main point when you are looking at these channels, you have to really understand that the channels to compare are portal and email. And then you have to think about chat as an option to perform. Because typically you're taking care of the most easiest cases in chat and phone. And that's why they typically are having a quite high, also for that reason they're having high happiness compared to other channels. But chat has been changing very much, and I think it was, like a year ago, it was the happiest channel after walking. It was like 75 even. But the thing is, I think what has happened here is that now we still have all the chats, and chat bots in the same.

Sami Kallio: So, chat bots are not yet really on the level that are making end users happy to be honest. So, now the happiness in chat is only a bit higher than in portal, so that it's 60, and the portal is 57.

Pasi Nikkanen: I think you can still see that the productivity number is quite good on the chat. And also what I've learned is that I've seen customers where people are not happy with the chat. It might be that they have just rolled it out, so they have just ... we have a technical capability, let's just put it on, without actually thinking how do we properly manage that channel? What is really the strategy for the channel? Maybe that is also, because it's a new thing, so we need to figure it out.

Sami Kallio: And we have been [inaudible 00:07:15], Pasi, you know that now chat bots are using those profiles, is something that we are still waiting for the first customer to really do that in action. But that will be an enormously good thing for chat bot to really direct the technical people to technical directions. Or, if you are supporting, just help them and ask them to call you, or call them. That would have a huge difference in the experience of end users.

Pasi Nikkanen: Yep. Okay, the last thing we have on the public Happiness Score™ is the contrary aspect. And I think this contrary aspect is also very interesting for global organisations where they have employees in different countries, because yeah, it might also reflect other things than just how happy country A is compared to country B.

Sami Kallio: Yeah, I would say that these reference in the opposite way. If the happiness of a country is really high on overall, the expectation level from IT services is high, and you get lower scores. But if you are having a kind of rough life, then it's easier to get high scores in IT support because your expectation level is not so high. That's maybe very, very roughly said, but overall what we have seen here is that the Netherlands is the most critical country. I won't say that they have the worst service. Now, they are not having, but they are really critical.

Pasi Nikkanen: Yeah. And I think the people watching this on the YouTube Channel can actually see the slides. And if you don't, you can always go to the episode notes, and we have a link there. But basically we can see that the European, Western European countries they are the most critical ones. And then, like you said, when you go outside of that, then I guess the expectation for the IT is not as high.

Pasi Nikkanen: All right, so that's the update on the Happiness Score™. We'll do this probably two, three times a year, see what it has been changing. But this was the first introduction to the topic.

Sami Kallio: Yeah, and I hope the next one will be about HR, and finance benchmark, which will be released hopefully.

Pasi Nikkanen: True, I think we are pretty close on gathering data on those as well. Yep. Thank you for listening, and you can go to our website and look at the Happiness Score™ yourself. Thank you. 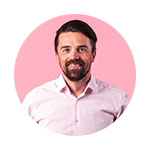 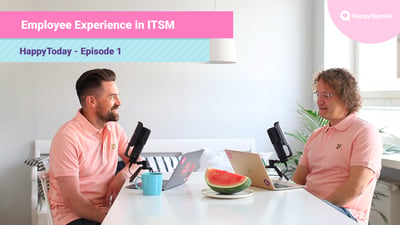 In this episode Pasi & Sami talk about Employee Experience in ITSM and how HappySignals got started. Why is there a ... 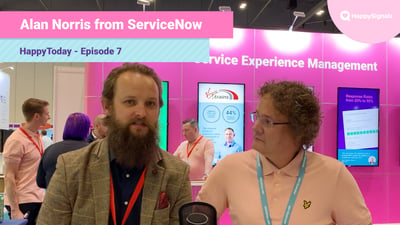 Interview with Alan Norris from ServiceNow

In this episode Sami Kallio meets Alan Norris, ISV Consultant at ServiceNow. They discuss how employee experience and ...